This Is What Happens to Your Brain When You Sleep

While you’re fast asleep, your brain is busier than ever. But what’s actually going on? Are we detoxing, learning, or protecting our health? Here’s what happens to your brain when you sleep.

As a neuroscience researcher, the role of sleep is fascinating to me. We spend about a third of our lives sleeping, but why have we evolved to need rest each night?

Keep reading to discover the intricate activity of the brain during sleep.

First, How Does Your Brain Prepare for Sleep?

The onset of sleep is driven by your circadian rhythms and a group of photosensitive cells in the suprachiasmatic nucleus (SCN). The visual system is connected to cells in the SCN, letting them know if it’s day or night.

The SNC is linked to the pineal gland, which promotes the release of melatonin, a hormone associated with the onset of sleep.

The SNC is located deep within the hypothalamus, a peanut-sized structure responsible for regulating your arousal levels. The hypothalamus also governs your nervous and endocrine systems, explaining why sleep affects how alert you feel, as well as how it governs hormone levels in the body.

What Happens to Your Brain When You Sleep

Neuroscience is still uncovering some of the mysteries of sleep. However, we have a solid grasp of what sleep does for the brain to promote both cognitive and overall health.

All things considered, the research is clear on one thing: Your brain doesn’t switch off like a computer. In fact, modern medicine defines death as the absence of brain activity.

While you sleep, your brain is hard at work, managing a complex array of brain and bodily systems that leads to renewal and regeneration. Among many other things, changes to the quantity or quality of sleep you get affects your ability to prevent and recover from illness.

Here’s a closer look at what your brain does while you sleep.

The brain is a connected system, and the hypothalamus doesn’t work alone to promote sleep.

Located at the base of the brain, the brainstem (which contains the midbrain, medulla, and pons) plays a role in the onset of sleep and dreaming. These two regions release gamma-aminobutyric-acid (GABA) and adenosine that reduce the brain’s level of arousal.

In modern-day anesthesia, GABA is one of the neurotransmitters that medications target to induce sedation. Interestingly enough, it’s these same GABA receptors that relax your muscles and prevent you from acting out your dreams.

Next, adenosine is sensitive to caffeine, which may help explain why drinking too much coffee can make it hard for you to fall asleep.

Conversely, a different cocktail of hormones typically keeps us awake during the day. These include adrenaline, norepinephrine, serotonin, acetylcholine, hypocretin, histamine, and cortisol. During the onset of sleep, however, the levels of these hormones decline.

Specifically, cortisol levels drop at night time to encourage you to fall asleep. Then in the morning, they increase to help you wake up and feel refreshed.

But when your levels of cortisol are out of whack, either from stress or sleep deprivation, these natural patterns become less pronounced. Thus, it can become more difficult to fall asleep and wake up refreshed. 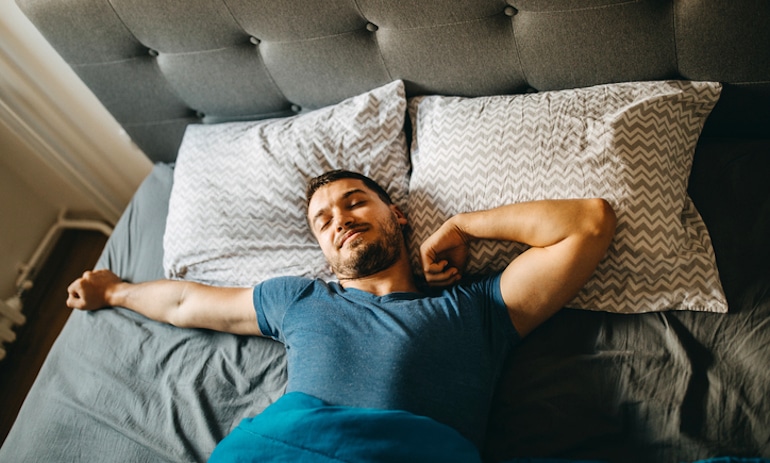 The moment you’re asleep, the “night shift” team takes over. It collectively orchestrates a repeating pattern of brain activity, each about 90 minutes long. During sleep, your brain is either in a period of non-rapid eye movement (NREM) or rapid eye movement (REM).

NREM is the workhorse of sleep, accounting for 75 percent of the total time you spend sleeping. It’s during this time that the body is busy regenerating cells and tissues.

Neuroscientists divide NREM sleep into stages N1 to N3. Each stage is associated with brain and body changes:

As the name suggests, the telltale sign that you’re in REM sleep is the visible movement beneath your closed eyelids. In REM sleep, your muscles are “paralyzed” and relaxed.

If NREM is your body’s best friend, think of REM as your brain’s housekeeper. While you’re awake, the blood-brain barrier (BBB) protects the brain by preventing the entry of most substances into the brain. Yet while you dream, the brain opens its doors to the cleaners.

During sleep, the BBB encourages the entry of cerebrospinal fluid (CSF) into the brain. The CSF enters the brain in pulsating waves to flush out all the toxins and byproducts of a day spent processing information.

People with a long history of poor sleep, or those who sleep for less than four to six hours per night, show a build-up of proteins such as tau and amyloid plaque associated with neurocognitive decline. 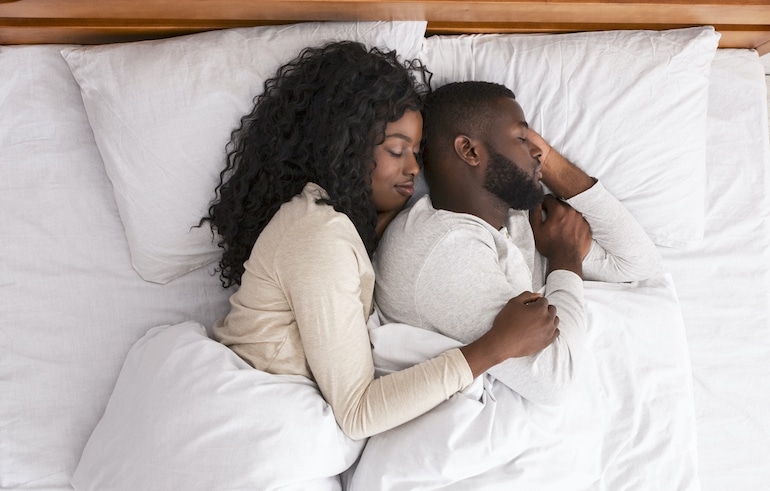 Next, while dreaming can happen at any time during sleep, it’s typically associated with REM.

Most people spend about 25 percent of their total sleep time dreaming. You have dreams every night, even if you can’t recall them.

During NREM sleep, the cerebral cortex is typically inactive, letting the brain focus on clean-up and regeneration. But while you’re dreaming, the brain is ‘“reawakened” by the thalamus. The cortex is then filled with sensations, images, and sounds that we interpret as dreams.

The process of dreaming enables the brain to actively sort through information from the day, recasting some of these experiences into long-term memory. Further, the brain is busy solidifying connections between neurons associated with learning a new skill or task.

Finally, the amygdala—the area of the brain associated with emotion regulation—is activated during REM. In part, this helps explains why disrupted sleep affects your mood, your ability to manage emotions, and even your libido.

In sum, we have a clear picture of what happens to our brains when we sleep. However, some mysteries remain, including why we dream and what function dreaming has.

That said, psychotherapy has long argued that dreaming is a way of managing our emotions, be they desires we can’t articulate or stressful experiences we have trouble dealing with.

Yet as far as the field of neuroscience goes, what we do know for sure is what happens while you dream, as well as the consequences of not getting enough sleep—and REM sleep in particular.

The post This Is What Happens to Your Brain When You Sleep appeared first on HUM Nutrition Blog.