Human skin is a multi-layered organ made up of tissues designed to protect underlying body parts such as bones and muscles. These tissues serve as a first line of defense by preventing pathogenic organisms and foreign substances from invading the human body. Beyond its protective functions, human skin also serves as an ecosystem for billions of microorganisms that colonize each fold, crease and niche from head to toe. In this article, we describe what the skin microbiome is, which microorganisms are part of the skin microbiome and how we’ve come to understand the various relationships between the human skin and its microbial residents through advanced genomics.

What is the skin microbiome?

The skin microbiome1 is the collection of all microbiota and physical components that co-exist on human skin. While human skin is typically cool, dry and weakly acidic, there are distinct habitats including hair follicles, glands and skin of variable thickness that support a diversity of microbial communities. This complex ecosystem is built upon a diverse network of resident microbes that persistently interface with the living (e.g. immune system) and physical (e.g. hair) parts of skin.

The skin microbiota are generally harmless due to their ability to adapt to the various physical and chemical features presented by each niche. This ecosystem maintains such harmony largely due to the symbiotic relationships between commensal microorganisms and their immediate surroundings. Commensal microorganisms are bacteria, fungi and viruses that interact with each other and their environments in a mutualistic manner. The nature of these mutualistic interactions depends on a combination of site-specific host factors and environmental factors that influence which commensal microorganisms colonize each niche found upon the skin2.

What microorganisms make up the skin microbiome?

The skin microbiome can host a wide range of microorganisms such as bacteria, fungi, viruses, archaea and animals such as mites. Commensal bacteria make up the largest group of microbes found throughout the skin microbiome3. The establishment of commensal bacteria on the skin seems to be largely dependent on the physiology of each skin site. For example, sebaceous skin sites like the forehead or behind the ear tend to be dominated by Propionibacterium species while moist areas like the inner elbow contain an abundance of Staphylococcus and Corynebacterium species.

A closer look at the skin microbiome

Generally, the lack of nutrients beyond basic proteins and lipids heavily shapes the composition of skin microbiota throughout each microenvironment. This is particularly true at sebaceous skin sites, which are dominated by lipophilic species like Cutibacterium acnes (formerly known as Propionibacterium acnes)4. These species thrive in such an environment due to their ability to digest sebum, the mixture of lipids secreted by sebaceous glands. The digestion of these lipids by Propionibacterium species produces free fatty acids that further support their local establishment by promoting bacterial adherence. Like their bacterial counterparts, Malassezia restricta, M. globosa and M. sympodialis are lipophilic fungi that dominate the fungal microbiota throughout sebaceous microenvironments on the skin. Interestingly, these species of fungi are persistently abundant in dry, moist and sebaceous skin sites5.

Staphylococcus and Corynebacterium, the most abundant bacterial residents in moist skin sites, thrive because of the high humidity in these niches, such as the navel and inner elbow. This preferentially supports the establishment of aerobic species like Staphylococcus hominis and S. epidermis. These commensal staphylococci have been of great interest to research scientists due to their ability to secrete lantibiotics2, a class of antimicrobials capable of disrupting the cell membrane of Gram-positive bacteria like the pathogenic Staphylococcus aureus. Commensal staphylococci have also been shown to directly interact with host cells in a beneficial manner. For example, S. hominis species can produce metabolites that enhance the tight junction functions of the epidermis6, the top layer of the skin.

The drier areas of skin tend to host a more diverse microbiota in comparison to moist and oily niches. While Gram-positive bacteria like Streptococcus species are well represented in dry skin microbiota, advances in molecular analyses have identified Gram-negative species that adapted to dry body sites like the forearm and dry parts of each hand. Some of the most common Gram-negative bacterial species found on these sites include commensal species of Veillonella and Prevotella2.

The skin microbiome and disease

However, disruptions to commensal communities are generally associated with common skin diseases like acne and eczema8,9. Acne is a skin condition that occurs when hair follicles become clogged by lipids and dead skin cells. Even though there are several risk factors that can cause the development of acne, a skin microbiota unbalanced with lipophilic commensals like Cutibacterium acnes is associated with chronic acne5. For example, skin biopsy samples with acne visualized higher burdens of Cutibacterium acne than biopsy samples without acne4. Cutibacterium acnes sub-strains associated with acne have also been shown to activate complement pathways, which can lead to a pro-inflammatory cytokine response2,4. 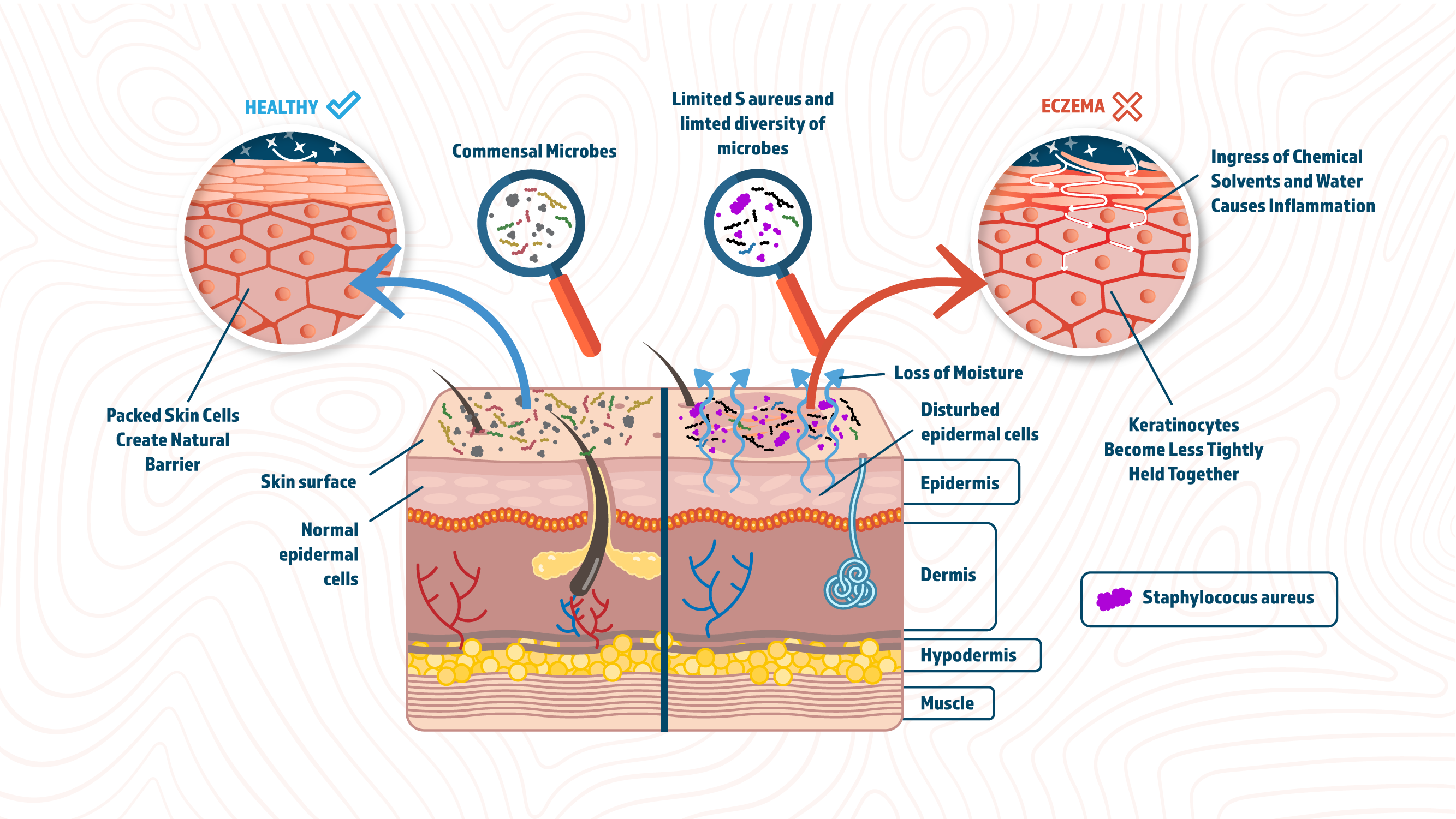 Eczema and atopic dermatitis (AD) are inflammatory skin conditions characterized by red rashes of variable size. These chronic diseases are strongly associated with unbalanced skin microbiota that contain higher levels of Staphylococcus aureus9. While a healthy skin microbiota is capable of resisting S. aureus colonization, localized shifts in pH, lipid and fatty acid content can support the establishment of S. aureus. Higher levels of S. aureus colonization have been linked with eczema and AD cases reported9, which strongly suggests these microbes can influence the inflammatory status of skin sites where rashes develop.

How can we analyze the skin microbiome and what techniques do we use?

Characterization of the skin microbiome has rapidly improved due to advanced molecular techniques like next-generation sequencing. Prior to these advances, research scientists depended on culture-based methods to grow microorganisms obtained from skin samples. While culture-based methods are essential for characterizing microorganisms in vivo, next-generation sequencing methodologies enhanced the resolution of identification for uncultivatable bacteria, fungi, viruses and archaea.

Long read sequencing (LRS) is a relatively new technique that can be used to identify DNA molecules in section of up to 100,000 base pairs at a time10. This approach enables researchers to detect variable components of genomic samples at high resolution, thus allowing them to characterize microbial genomes that were previously undetectable by cultivation or short read sequencing. LRS works by sequencing transfer RNA (tRNA) molecules. Sequencing tRNA from biological samples like the skin provides greater insight into differences in gene expression levels exhibited by various microbes found throughout the biological sample being investigated. When such techniques are applied in the clinic, researchers are capable of further exploring the potential links between the human microbiome and the variable health status of patients suffering from disease like cancer.