How to Deal with Ghosting in a Healthy Way

A therapist teaches us how to deal with ghosting in a productive, healthy way.

Being ghosted is the worst. And while it often feels as though you caused it, we’re here to tell you that more often than not, it’s not really about you.

Below, learn more about how this modern scenario gained traction, the psychological effects of ghosting, and what to do when you get ghosted.

If you’ve never experienced ghosting firsthand, you might think it’s a trendy way to celebrate Halloween. But in reality, the term speaks to the spooky act of fully up and leaving a relationship without a word.

According to NYC-based therapist Risha Nathan, LCSW, HHC, the term ghosting first appeared once online dating started to flourish. And it makes sense. After all, when you’re only chatting on an app, it’s easy to stop communicating without another trace.

Nevertheless, while ghosting is often associated with dating, Risha says it can also apply to friendships, working relationships, and more.

“This has become extremely prevalent, at least partially due to the nature of the way we exist currently,” she explains. “Our society is breeding avoidant behaviors—like not communicating feelings or working through issues—but instead deciding that it’s much easier to just leave.”

Which leads us to today’s discussion…

WHAT DOES GHOSTING DO TO A PERSON?

Part of knowing how to deal with being ghosted is understanding its effect in the first place. After all, it can be quite jarring.

“In the best-case scenario, a person may have the confidence to decide that they’re better off without a person who’s comfortable just leaving without a conversation,” Risha says.

However, in the worst cases, she says that ghosting can feel very personal. “For some, being ghosted is a reinforcement of their worth (or lack thereof) that can cause a lot of pain and shame,” she explains.

It’s within those worst-case scenarios that ghosting is especially detrimental. “People often look for the ‘whys’ in situations where they feel abandoned,” Risha continues. And while seeking out information can be useful, when it comes to ghosting, she says that you already have all the information you need.

No doubt, ghosting can be painful—but it should be a reminder of what you don’t want in your life, not a trigger to wonder what’s wrong with yourself. (Easier said than done, we know.)

How to Deal with Ghosting

As difficult as being ghosted can be, Risha says that it’s important not to try not to attach meaning to someone else’s behavior.

With that in mind, instead of dwelling on the ghosting situation, remind yourself that the goal is availability and consistency—nothing less. And staying true to that idea, she says it’s best not to reach out.

“As tempting as it may be to continue to reach out, don’t,” she urges. “Let people go. You can’t keep them.” That said, if they return and want to offer an explanation for their behavior, that’s okay. Just make sure to keep your guard up so you won’t get sucked back into their inconsistency.

Stay As Neutral As Possible

Part of keeping your guard up is knowing how to respond if and when a ghoster returns. “When thinking about telling someone that they hurt you or did something wrong, make sure to check in to see what your agenda is,” Risha says. “If there’s a need to let someone know how much damage you feel because you think it may elicit a guilt response or make someone like you, hold off. While it’s important to express feelings, if there’s a specific outcome desire attached to that expression, it can end up being problematic.”

In that way, when it comes to how to get over being ghosted, Risha says it’s all about managing expectations. 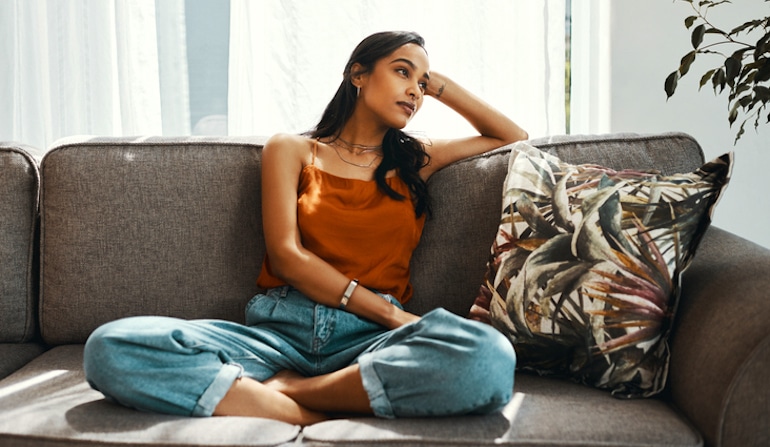 As painful as ghosting may feel in the moment, it may actually be a blessing in disguise. So, in the interim, Risha says to take some alone time and know that it’s not your fault.

“You’re not to blame for other people’s behavior, nor do you have control over it,” she reminds us. Keeping that in mind, use your time post-ghosting more wisely and focus on yourself instead of the other person.

“Check in on your self-esteem and self-worth. Make conscious choices to be around people who offer love and support that feels encouraging,” Risha suggests. And, if any of those people feel unavailable even sans ghosting, she recommends considering closing the door yourself.

The post How to Deal with Ghosting in a Healthy Way appeared first on HUM Nutrition Blog.